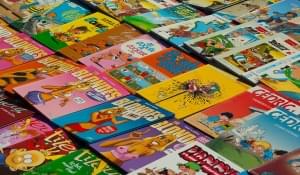 Over the weekend I had the opportunity to attend O Comic Con! I’ve always been a huge nerd, but growing up in a small town, conventions like this don’t really exist. I was living in Omaha this time last year, but life kept me busty so I also didn’t get the chance to attend last year.

This was my chance, and it was awesome.

I talked with Podcasters, cool local artists who have drawn comics for Marvel, authors from LA who have really cool books, and people who dressed up in costumes of their favorite characters.

My favorite moment was probably walking into a random panel and it turned out to be the dude who played Death on the CW show Supernatural, which is a show I watched religiously growing up. It was all pretty surreal.

Another cool moment, this woman who did the Cosplay thing for a living was handing our business cards. One side was her contact info, and if you flipped it you got a scratch off that revealed an adult picture, so that was neat.

Overall I had a great time. People of every type were there and all just having a good time, from film nerds, music nerds, costume nerds, comic nerds, everything! If you go next year I can almost guarantee you’ll have an amazing time!